A YouGov survey of more than 2,000 UK adults has found that nearly one in five are now using ad-blocking software.

The IAB report shows use of the software up from 15 per cent to 18 per cen in the space of a year.

Here is their release in full:

London, 11 November 2015: The latest wave of the Internet Advertising Bureau UK’s Ad Blocking Report, conducted online by YouGov, reveals that 18% of British adults online are currently using ad blocking software. This is a rise from 15% in early June. 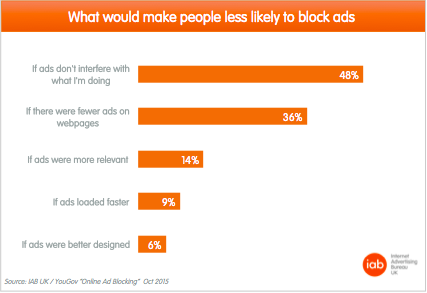 “However, it does provide some perspective on the situation for those referring to an “adblockalypse.” More importantly, it also provides a clear message to the industry – a less invasive, lighter ad experience is absolutely vital to address the main cause of ad blocking. That’s why we're developing the L.E.A.N advertising principles for the online advertising supply chain.”

Majority still prefer free content and ads vs having to pay
When told that ad blocking means some websites will have to stop providing free content or charge people to use them, 61% of British adults online said they would prefer to access content for free and see ads than pay to access content.

Phillipson explains: “The other key tactic to reduce ad blocking is making consumers more aware of the consequences – what we call the “value exchange.” If more people realise content is only free because ads pay for it, then fewer people will be inclined to block ads. Only 4% are willing to face the other option – paying for content with no ads.”

Among those currently using ad blocking software, 71% are doing so on laptops, 47% on desktop PCs. Just under a quarter (23%) are blocking ads on mobiles, less than one in five (19%) on tablets.