It was the debate where how to cut public spending was the top of the agenda so it was perhaps ironic that Terry Taxpayer footed the bill for the most lavish debate staging so far.

The BBC party leaders debate last night was by far the classiest of the three – it was a Rolls Royce to ITV’s Ford Focus and Sky’s shiny red Porsche. 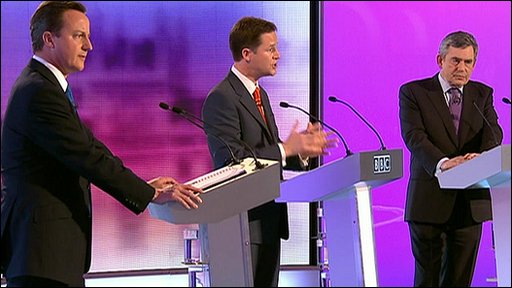 The Great Hall of Birmingham University provided a suitably impressive venue for what was a historic event – far better than the studio settings chosen by Sky and ITV.

David Dimbleby had the edge as the presenter with the most gravitas, sense of occasion and confident calm.

He tried to persuade the candidates to move beyond their pre-prepared soundbites and message-grids by asking them to “explore these issues a little further” and to ‘clarify’their answers. And by repeating the questions supplied by members of the public in an, often vain, attempt to get them to stay on topic.

But as with the other debates – this wasn’t really a journalism job so much as a refereeing gig, keeping an eye on the clock to make sure everyone had an equal shout and stayed within the rules.

It was left to the candidates to ask questions of each other – with Gordon Brown pressing David Cameron to give a straight answer on whether he thought his inheritance tax plans were fair and Cameron and Clegg trying to pin each other down on the detail of each other’s immigration figures. None of them did give each other any straight replies, well now they know how it feels.

The strict debate rules have made the staging of these debates more akin to theatrical or sporting events than the great tradition of adversarial broadcast political interviewing.

But there is one big journalistic lesson to be learned from them.

When it comes to politics – show, don’t tell worksâ€¦big time.

Since last October the UK’s biggest selling newspaper, The Sun, has been the Conservative Party’s most forthright propagandist . As far as we can tell this has made not one iota of difference to the party’s standing in the polls, which has steadily slipped since then.

As the opinion poll detailed in the April edition of Press Gazette shows, members of the public are cynical in the extreme when it comes to being editorialised to by journalists about politics.

We found that nine out of ten members of the public sincerely believe that no editorial outlet has the power to sway their vote. When we asked them to name their most trusted news outlet when it comes to reporting political news – the fourth most popular answer (which they volunteered themselves) was ‘I trust no-one when it comes to political news”.

These debates have simply put three candidates in a room for four and half hours, held a mirror up to them and let the public judge for themselves without pushy interrogations or editorialising. And the results of been electrifying.

My final scores are: