A-level results press coverage examined: So what if the brightest teenagers in the land also happen to be photogenic? - Press Gazette 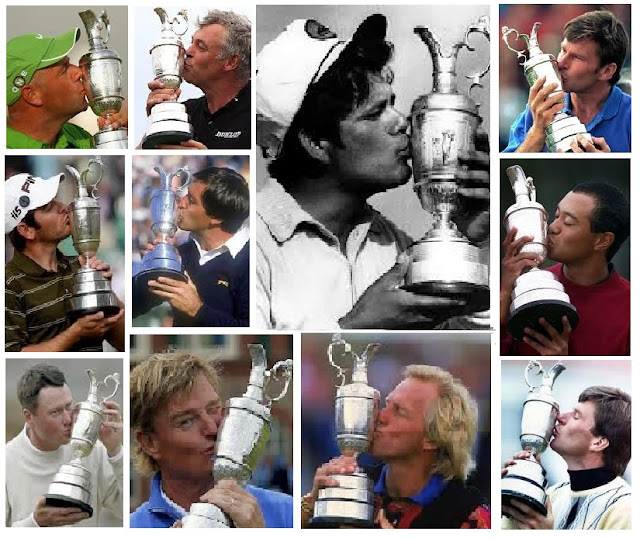 An honoured tradition or a cliche? If you win the Open you are likely to appear on the front pages kissing the Claret Jug.

If you pass your A levels with top grades, you are likely to appear on the front pages jumping in the air and waving a sheet of paper.

What's not to like? A sunny summer picture of happy young people celebrating the fruits of hard work and dedication.

Except the pictures tended to feature pretty girls in spaghetti straps. So the cry went up: "What about the boys?"

What about the boys? We don't see pictures of the runner-up or token women with the Claret Jug do we? We see the winner. And that's what we were seeing with the A-level girls. They were outperforming the boys and getting the best grades. They were the brightest teenagers in the land, who also happened to be photogenic.

For some reason the fact that girls were doing better than boys at school was regarded as a 'problem'. Goodness knows why, but all the 'experts' said that it was important for the country that boys did better . It was vital that they were motivated and encouraged. That one annual picture of girls jumping for joy was unfair, discriminatory and making boys feel neglected.

And why were the girls always pretty and blonde? What about the plainer Janes? Why were they always white?

A case of not seeing is believing. Not all  the girls were magazine cover material. But intelligent young people have bright eyes and enthusiasm that shines in their faces, especially when they are happy. They can't help but look lovely. Always white? No. Girls of African or Asian origin are among our most academic students and when their schools were featured, some took their place in front of the camera. Most chose not to.

Photographers all over the country have continued to ask students to leap into the air and the results are almost always enchanting, but they have been banished from the front pages. 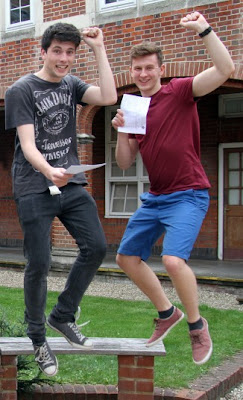 Yesterday the papers went into overdrive with A-level coverage on their websites from 7am. There was barely a spagehetti strap to be seen (too chilly), but there were plenty of skinny jeans and naked midriffs. TheTelegraph tried to have a bit of fun with the cliche, posting galleries of girls jumping for joy and boys jumping for joy. The trouble was, the boys weren't that keen on the idea and those who gave it a go weren't very good at it.

The comments thread made depressing reading:

'Your attempts at balance are laughable. How many boy photos have you featured compared to girls?  You should be ashamed'

'Girly swot photos are so predictable'

'Why is it always swotty girls? No wonder boys feel alienated from the academic process'

'I think it would be good to see some pictures of heartbroken youngsters looking despondent too. Just for the sake of journalistic balance'

And on the boys' gallery:

'Well done DT, you've got a sense of humour'

'Now the plain ones who failed please'

Two other comments on the girls' gallery pointing out the lack of coloured faces seemed justified, but what a shame. Is it so wicked for a paper to indulge in a bit of self-mocking irony?

[As it happens, the Times did once try to escape the stereotype by using a front-page picture of a girl who had failed to get the grades she needed. She was happy to pose and spoke about her disappointment. But when the first editions came up the Times looked so cruel in comparison to its rivals that the night team ordered  flowers, chocolates and champagne to be delivered to her first thing the next morning.]

The Telegraph team must have felt bruised by the response to its bit of nonsense, for today's print edition went with a hamper splash on A levels and a photograph of the Olympic opening ceremony stuntman who was killed yesterday. The inside coverage was restricted to a spread of two half-pages and the small photographs are all case studies, including Alastair Herron, a 7 A* pupil rejected by Oxford, the Narnia actress Georgie Henley, the diver Tom Daley and the Zanzibar acid attack girls.

Back on the website today, the jumping galleries were left to skulk, unpromoted, in the background. There were still pretty girls, though, and this was the illustration for  a story about the resurgence of tougher subjects over 'soft options' such as media studies. 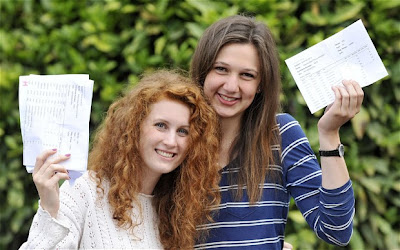 It was captioned 'Students took to Twitter to tell how they have been offered places despite seemingly falling short of offers'.

Oh dear. These girls are clearly not tweeting, and if they were it wouldn't be about falling short of their offers. Eloise Davies and Jess Moxom of the girls' high school in Chelmsford are both off to Cambridge, having each achieved a handful of As and A*s.

Mail Online ran dozens of pictures of smiley girls and hardly gave the boys a look in. But those who did break through were pretty special. There was 12-year-old Andrew Ejemai from Brentwood, who got an A* in maths, and Zohaib Ahmed, who is off to Southampton University in October after getting an A in physics to go with the A* in maths and further maths he achieved three years ago, aged 10. Then there was Daniel McBride, a cancer sufferer who won a double scholarship to the Royal School of Music, and Jeremy Budd, who secured a place at Cambridge with 4 A*s, in spite of having to be taken to his  exams in an ambulance.

Like the Telegraph, the print edition was photographically restrained. The front was an A level-free zone and the main picture on the inside spread was the young Georgie Henley as Lucy in Narnia. That was coupled with an inset shot of the actress as she is now, preparing to read English at Cambridge. After that it was small shots of the same case studies – Alastair Herron, Tom Daley and Andrew Ajemai, plus the dyslexic Penny Banks, who is heading for Cambridge, and a pair of identical twins about to be separated for the first time.

The contrast between exuberance on the web and restraint in print was in evidence across most of the papers. The Express was alone in running a ladies a-leaping picture, while the Independent rather cruelly sliced Gem O'Reilly, a bedroom musician taking a gap year to bid for stardom, down the middle across the gutter. The Times, which these days publishes pictures of comely women at the drop of a hat, went for a clutch of boys from Bristol doing a Usain Bolt on the front – a South Wales News Service photograph that scored for being both jolly and a neat twist on an old formula. 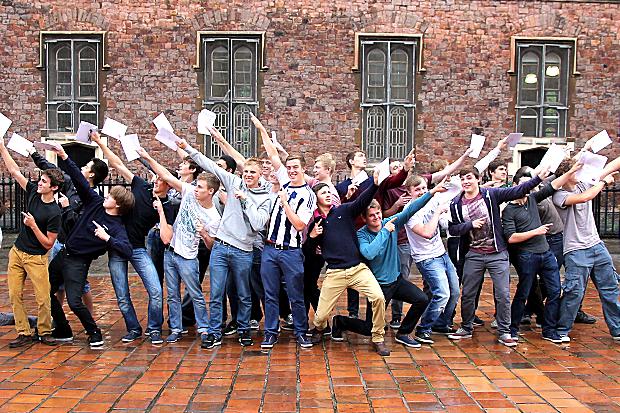 So much for the pictures, what of the words? These, too, tend to follow a formula – grade inflation, too easy, the exam you cannot fail etc. This year, however, there were real news stories in the statistics:

*A new rule allowing universities to take as many students as they like, so long as they have 2Bs and an A, means that half of the 24 Russell Group universities have joined in the clearing game instead of remaining aloof. There are therefore far more places on offer than usual, so that many students may be able to 'trade up' to better courses or better institutions.

*Students are abandoning subjects such as communications studies and PE, and going back to traditional academic disciplines, so there has been an increase in the numbers sitting economics, maths and physics.

*By yesterday lunchtime more than 400,000 people had their university places sorted, a record for the first day after publication of the results.

These three elements, each reflecting on the others, could very usefully be woven into a single story – as the Guardian did with its splash:

Ah, the gender gap. More girls are taking English, more boys are taking maths and physics. Panic stations, everyone! This cannot be allowed to continue if we are to have more women engineers. Teachers must be stereotyping. Terrible. Terrible.

There is no concern about the boys who have moved away from English, mind.

And the poor boys who were being alienated from the education system by all those pictures of pretty girls seem to have recovered for they now reign supreme. On one measure at least: 7.9 per cent of male entries resulted in an A* compared with only 7.4 per cent of female entries.

This excited the Independent papers: 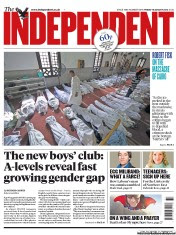 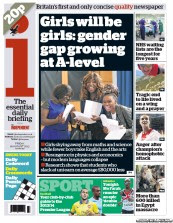 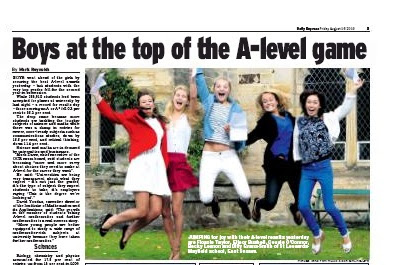 First a little point of style. It is easiest for the reader to understand if papers adopt a style of using A-level adjectivally (A level is fine for the noun). The principle is particularly helpful if the words come at the start of a sentence.  'A level gender divide'? Is that like a level playing field – or rather an unlevel playing field?

So we are back to the old-fashioned battle of the sexes. OK, so be it. If that's what is required, here are a few numbers to throw into the mix:

See, you can make numbers say almost anything you want. 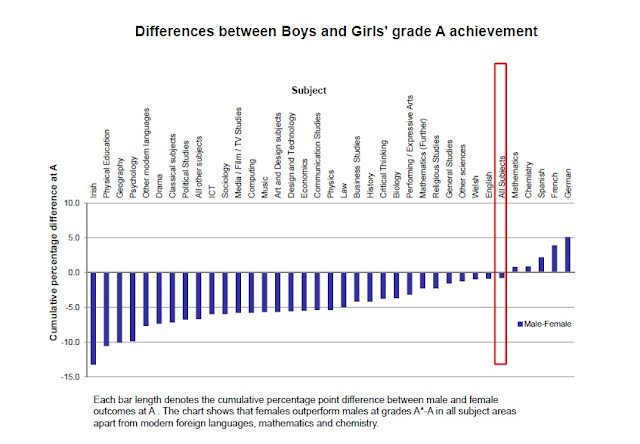 Much more clear cut is the difference in the numbers achieving As and A*s. As you can see from the Joint Qualification Authority's chart above, the girls beat the boys in every subject except maths, chemistry, Spanish, French and German.

With GCSE results on the way on Thursday, how about we forget about the battle of the sexes and just celebrate the achievements of our teenagers?

Well done to all of them. It's enough to make you jump for joy. 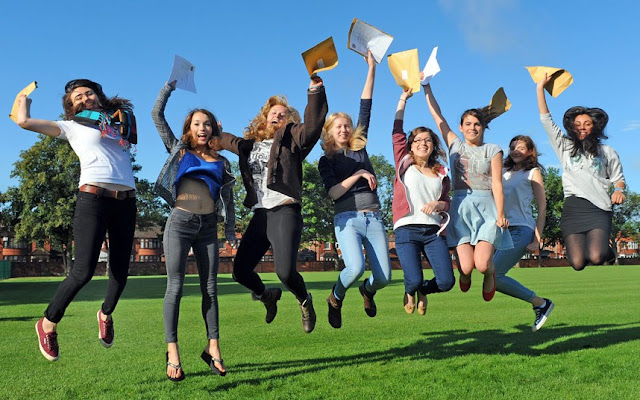